Sony Cancels Release of "The Interview"

Sony Cancels Release of "The Interview" 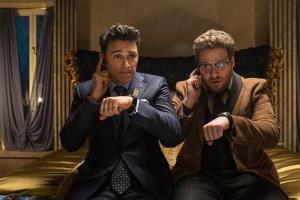 1)  How do we know who is responsible for the hacks?  What evidence is compelling enough to make a threat credible?

3)  In what ways is this cancellation related to appeasement in war?  How is not?  How is this related to math?

4)  What if the plot focused on a thinly veiled fictional character?  What if this was scheduled for debut during the summer?  How might it be different if it is accessible on Netflix?

5)  Who will be most affected by this news?  How might it be a significant marker in the history of pop culture?  Is this significant to national policy regarding potentially hostile nations?

1)  Students can explore the relations between the US and the Korean peninsula and write a petition to the leader of a country who might mediate talks to resolve the situation.

2)  Students can compile a list of the most controversial movies of all time and predict how they would be received today as well as compare their  reasons for controversy.
Posted by Seth Jaeger, EdD at 12:42 PM